The Real Housewives of New Jersey is a part of a long-running franchise of reality shows.

If you haven’t watched it already, you may be wondering if this is the next reality show that you should binge-watch. If you are looking for wealthy indulgence, this is a perfect show.

If you are looking for reality trash and endless, mindless entertainment, this is for you. The Real Housewives of New Jersey offers you all of this and more.

One of the first things that you will notice about the show is the wealthy lifestyles that these women and their families live in.

Between the large estates and designer wardrobes, you may end up feeling a little jealous at their extravagant lifestyle.

At the core, this show is offering you an inside look on the lives of these women who are among the wealthiest in their communities.

You will also notice that the cast loves the drama as much as the fans do. It’s a clique and good luck to people who want to break into the group.

There is also some tension between the perceived “old” money and “new” money families, with an elitist attitude to those families with old money and prestige in the community.

There are some things that you may not enjoy. Some of the drama tends to go on for way too many episodes, usually either fizzling out or ending in some way-over the top drama.

The show also plays heavily off of stereotypes, especially those of the “typical” New Jersey housewife and Italian-Americans.

You may even find it to be too outrageous and feel like you are being frauded at the end of every episode.

The cast can be a total mess one second and getting along like best friends the next. It can be hard to keep up with which Housewife is feuding with who, but at some point you just don’t even care anymore.

However, these negatives are also part of the allure of this television show.

It’s almost like watching a train wreck that you just can’t look away from. The outrageous antics make it addictive.

It’s full of drama. The Real Housewives of New Jersey is everything that you could possibly want in trashy reality television. There are verbal and physical fights that make this show even more entertaining for viewers.

Plus, who doesn’t want to watch something that makes them feel better about their lives?

The constant accusations and catty fights are what fans of this show lives for.

The Real Housewives of New Jersey is an overdramatic television show that you can easily become addicted to. Are you looking for you next reality show guilty pleasure?

This colorful cast is easy to love or hate, but you will not be able to avoid looking away from the show.

Between their obnoxious behavior and extravagant lifestyles, there can be endless amounts of entertainment.

Are you team Teresa or Team Danielle? Begin watching this show to pick which Housewife you are going to side with. 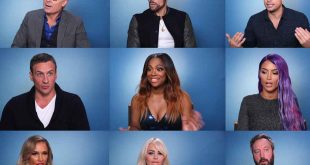