Do you really believe Kenya from Desperate Housewives of Atlanta is really married?

If you are a fan of the ‘Real Housewives of Atlanta’ series, then you know exactly who Kenya Moore is. But who is her husband? And is she really married at all?

If it isn’t in the reality show, can it really be reality, right? She is a staple of the show at this point, but isn’t keen on bringing her new man into the spotlight, and everyone is wondering why? A lot of people are even wondering if she ever got married at all.

We all know that scandals and surprises bring up the ratings, and this leads to a lot of questionable realities in our favourite reality television shows. How can you be sure that something is real, and not just a show for the cameras? And this is a pretty valid question for the like of Kenya Moore. She talked a lot on the show about getting married, dropping little hints everywhere like breadcrumbs we all loved eating up. Any news of the wedding had the internet talking, and this definitely did well for the show. But then, no onscreen wedding? The fans didn’t get to see any of it?

But it’s more than just being kept out of the loop for fans of the show, it also seems strangely out of character. You’re on a show with the word ‘Housewife’ in the title, and you don’t get married in front of the cameras? That sure seems a bit iffy.

And not to mention the fact that it all happened so soon. In a mere matter of months, the couple were happily wed, which also left fans wondering if the whole thing were real or not at all. Why marry so quickly?

Why not get the shotgun wedding up on the screen and at least make some money out of it? Well it seems that Kenya is taking a very dignified root with this, stating that she wants to enjoy time with her husband that is just about them, and that he didn’t sign up for the public life that she did.

This does seem fair, and a lot of the story does seem level headed enough, but there is just enough shadow there to still make you wonder. Should we demand to see a marriage certificate?

Kenya has not given anything away about her new husband appearing on the show in the future. She still says that they have never discussed it, but with the money that is ties up in that show, it is something you can only imagine was on both of their minds when and if they ever did tie the knot.

Until a marriage certificate is produced, and probably even after, there will still be some that call ‘Fake!’ on this relationship, or at least on the holy matrimony part, and some might think that that is fair. So, what have you decided? Is Kenya a REAL housewife of Atlanta? 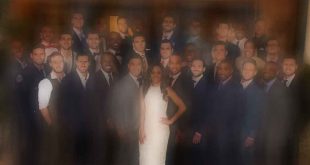